Ah Cama-Sotz is an act well renowned for his ability to create dark, dense atmospheres amidst the ritualistic beats and music of his compositions. So, I began to get quite excited at the prospect of “U-Boot”, a completely ambient album on the Spectre sub-label, Nautilus. All Nautilus titles are based around the theme of water, from which Ah Cama-Sotz has derived a typically sinister concept: the final, fateful voyage of a WWII U-Boat, U-68, which was sunk by US depth charges on 10th April 1944.

Our journey begins on the “Backbord” side with the “U-Boot Theme” which sets the tone and atmosphere for the rest of the album. Layers of cool, liquid, synthesized sounds wash over us, perfectly produced to give the true feeling of being submerged in dark, threatening waters with gallons of reverb and deep sub-sonic rumblings. There is no music to speak of on this side of the record, merely these gloriously expansive aquascapes, which appear to be totally assembled from analogue synthesizer sounds – as far as I can tell, there are no samples, rendering these all the more impressive.

The next phase of the record is the “Steuerbord” side which, while still continuing the atmospheric elements of “Backbord”, also brings a more tuneful air to the record through tonal shifts in the ambience and imitated submarine “pings”. The album now becomes increasingly mournful with each despondent chord and descending progression, the thundering basses growing ever stronger until the album reaches its climax in “Sinking”. This has to be one of my favourite Ah Cama-Sotz pieces, suddenly emerging out of the stifling atmospheres with a hauntingly beautiful melody: triumphant, yet doleful as it evokes the images of U-68’s crew, floating helplessly down to their silent, bitter end.

Every time I play this album, I become ever more enamoured with it. Ah Cama-Sotz avoids the usual ambient cliché of a “soundtrack to an unmade movie” by painting, not films, but incredibly detailed tableaux like pictures from a history book. While we can never know what the crew of U-68 experienced, “U-Boot” brings us frighteningly close; expressing with sound what words and images cannot. 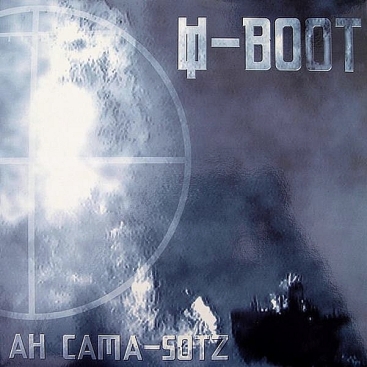