rites of the flesh
bats & cats epcd cat. BC04. 2002. belgium
released in: 2003
format: 3″ ep cd
limited edition: 520 copies. 3″ ep cd comes in a black cardboard package with 1 postcard fixed outside and 2 separate postcards inside.
listen / buy this cd on iTunes/Bandcamp:

Rites of the Flesh [review by immanence]

Ah Cama-Sotz’s previous album, La Procesión de la Sangre, was nigh on symphonic with its overarching conceptual structure, and the inclusion of small, thematic suites throughout. This latest release could almost be an addition or companion to La Procesión… occupying a similar musical territory and exploring themes linked to its concept, but that were left otherwise unexplored. As a quick glance at the cover art will tell, Rites of the Flesh concerns itself with pain; pain in its most ritualistic and subverted form. This is dark, dungeon music – the soundtrack to your sickest fantasies.

The first track, “Domination (Fascination)” is one of Ah Cama-Sotz’s patented nocturnal visionscapes of pitch-black drones, orchestral melodies, tempestuous winds and disturbing, echoing samples. Although, here we find the inclusion also of acidic bass stabs, seemingly imitating the crack of the dominatrix’s whip and, for once, justifying the inclusion of anguished, female moans. The longest piece on this 3” CD, it slowly, subliminally establishes the tone of what is to come as the atmosphere becomes increasingly dense and twisted. It creates vague images in our mind of sadomasochistic foreplay, piquing our curiosity and desire for something more tangible.

It makes sense, then that this is followed by “Sadistic Impulses (Fantasy)”, which moves the sound of the EP from the ethereal to a more concrete aesthetic of pumping techno beats and low, sleazy basslines. This is a further evolution of the sound that began on the Mantra EP; whereas before it was geared towards ritualistic atmospheres, it is now intent on getting our juices flowing with its subsonic rumblings and mid-paced, tantric groove. It slowly develops into a chaotic, noisier composition with distorted beats, incessant cymbal crashes and the spoken samples taking more prominence in the mix, building to a tremulous climax.

The final piece on Rites of the Flesh, is “A Taste for Spanking (Flesh)” another atmospheric piece with angelic choirs, deep infernal rumblings and frenzied guitar noise (good job this wasn’t released on Spectre!). It is uncharacteristically light for an Ah Cama-Sotz track, seemingly expressing the joys of the cathartic experience of masochistic punishment. It is quite a brief piece, also – perhaps illustrating the fleeting relief that this form of torture provides and how, like most listeners of this EP, you’ll feel compelled to return time after time.

I am of the belief that Ah Cama-Sotz can do no wrong, enjoying, as I have, all his previous releases immensely. I particularly like the way that each new release from him explores new ground, both musically and thematically, and Rites of the Flesh is no different. Admirers of his previous work will, no doubt, be just as enamoured with this as I am. 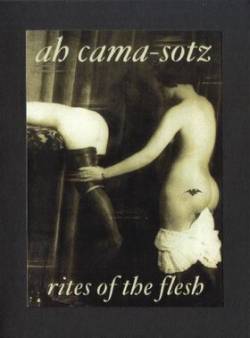